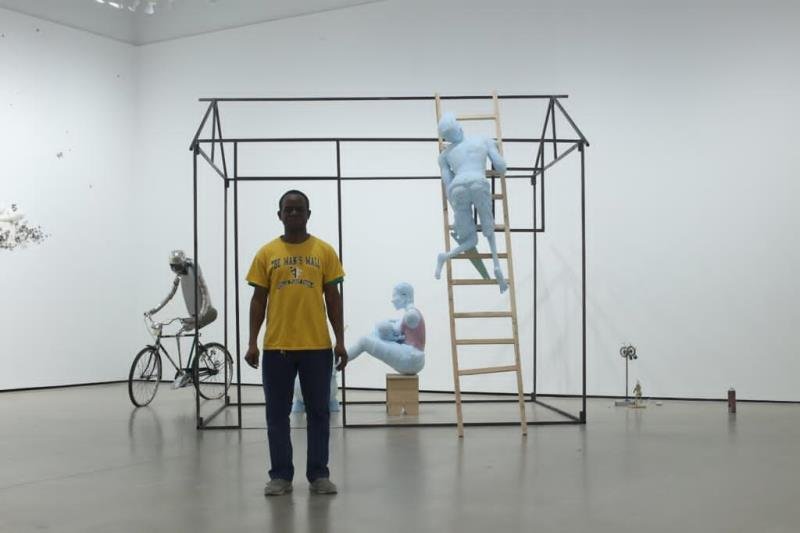 Yajim Amadu, a Ghanaian based in the United States, is receiving international attention for using sculpture to change perceptions about disability.

Amadu, who went to the States in 2017, has used found materials and sculpted blue foam to fashion one small sculpture and three life-size figures of real people — two of whom he met — who are functioning exceptionally, despite their physical disabilities.
The graduate of the Columbus College of Art & Design’s work under the theme, “Inspiring Change in Perception About Disability,” was on display at the King Arts Complex, Columbus, Ohio, United States.
The exhibits were part of the annual juried exhibit, “M(art)in Unites”, sponsored by Blick Arts Supplies and on view on February 22, 2020.
The theme of Amadu’s work is centred on how he was horrified as a child in the northern part of Ghana, by the killing of “spirit children,” – babies born with disabilities – believed to cause misfortune and were subsequently poisoned.
Though such killings were outlawed in 2003, some of these children still face discrimination and the requisite support to realise their full potentials to live independent lives in the service of humanity.
The sculptures are now on display at the Penthouse Art Studio at Columbus, Ohio.
In the exhibit, a Ghanaian, whose nickname is, “Big Man”, is shown climbing a ladder to repair the roof of his house despite his deformed weak legs.
“He has a wife and three kids and has been able to take care of his family,” Amadu said.
A Kenyan woman, who was born without arms, is seated, using her toes to stir the pot of food at her feet while she breastfeeds a baby.
Also, there is a boy from Ghana who Amadu read about. 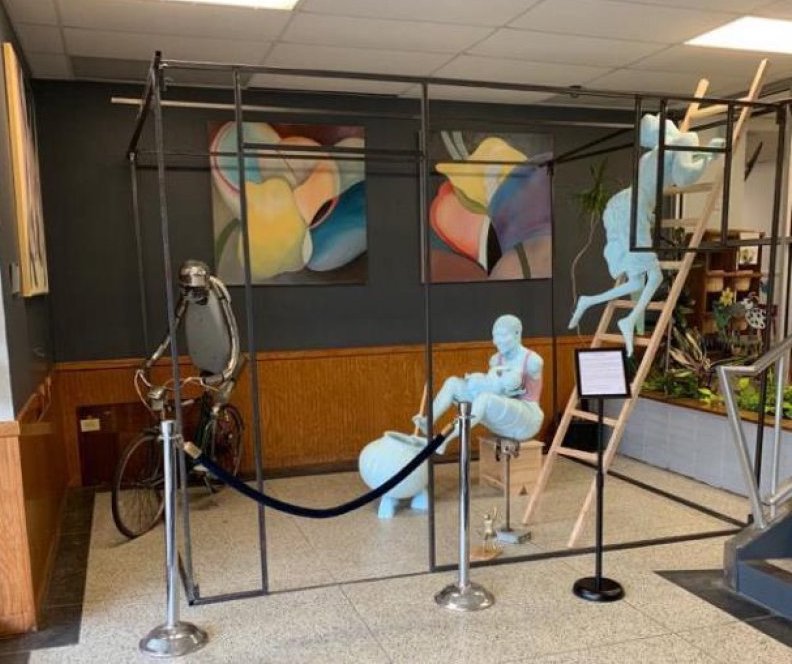 Amadu explains: “He was born with one leg was going to be killed by his father until his mother intervened. She carried the boy to school on her back until he became too big.
“When an American missionary took the boy’s story to a California foundation, it sent him a bicycle that allowed the boy to continue his education — and eventually ride hundreds of miles to call attention to the plight of the disabled in Ghana.” “Now in his 40s, Emmanuel Ofosu Yeboah has worked internationally to raise funds”.
“I became inspired by him,” Amadu, also a graduate of the Kwame Nkrumah University of Science and Technology, said.
He assembled his sculpture of the boy on the bike using streetlight cases for the body, metal pieces for the arms and leg, automotive exhaust parts for the head and a stainless steel bowl for the helmet — all mounted on an old bicycle.
The small sculpture in the exhibit is a motorized wheelchair made from discarded objects, including paint can lids and copper wire. As the wheels of the chair whirl, a sculpted boy — who represents children in rural Ghana — stands below the out-of-reach vehicle that would improve his life.
He said the work was created out of his desire to let the world realise the ability of disable people to reform “us from our spiritual weaknesses, change our lives as viewers and the world.”
“The images depict how differently abled we are and this can make a viewer walk away as a wiser more discerning person, looking at what the disable person could not do.”The work incorporates a mechanical and an electrical element to create movement that interacts with viewers and create a visual tension.
Source: GNA