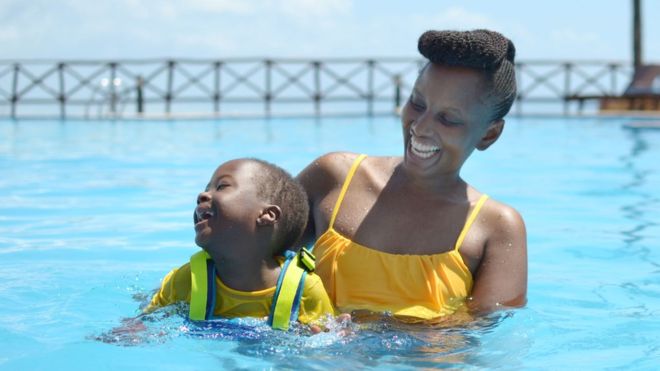 When Elly Kitaly gave birth to her son she found out he had Down’s syndrome. She realised that the condition was so ignored in her country, Tanzania, that there was not even an adequate word in her language, Swahili.

This is Elly’s account of her journey to find out why.

Waiting for an internal flight at Dar es Salaam’s airport, a young accountant started making conversation with me.

“Why are you flying to Arusha?” he asked.

I told him I was going to meet a friend I had made on Instagram. She is a mother, like me. Her son is four, like mine, and just like my son Chadron, he has Down’s syndrome.

This is a question I get often in Tanzania. It doesn’t matter how educated you are, no-one seems to know what it is.

I geared myself up to give my well-practised explanation.

I wanted to switch into our language, Swahili, but I knew I had to keep to English because there isn’t a good-enough word for Down’s syndrome in Swahili.

My language is a reflection of my country – it can sometime feel like Down’s syndrome (DS) doesn’t exist in Tanzania.

Take my fellow passenger at the airport.

I explained to him that there are some common physical signs of DS, like slanted eyes and a flat nose.

He looked blank. So I showed him pictures and he said he hadn’t seen people like this before.

We boarded our flight and the conversation came to an end but it got me thinking.

Looking back, I realised that growing up, I’d never seen a person with DS either. Not at school, not in the market, and not at church.

I was barely aware of the condition until I gave birth to my own son.

I remember frantically Googling it in my hospital bed.

I learnt that the most common form of Down’s syndrome is trisomy 21, trisomy meaning third chromosome. You can think of chromosomes as the instruction manuals for how to build your body. It’s typical to have 23 instruction manuals, each in duplicate, but people with trisomy 21 have an extra, third, copy of manual 21.

Crucially, I learnt that this extra chromosome comes about as a result of random events during the development of the embryo, egg or sperm cells.

If it’s random, it can occur just as much in Tanzania as any other country.

Given that, why hadn’t I, or my new accountant friend, seen anyone with DS in public?

With this question in mind, I arrived in Arusha and met my Instagram friend, Magreth Paschal, for the first time in real life.

As we sat at her home admiring her plants from her floristry business, she told me the first she had heard of the condition was when her son was diagnosed.

Like me, she hadn’t seen people with DS at all when she was growing up.

She suspected that this was because parents had been shamed into hiding their children.

The reason she held this suspicion was because of something that happened to her when her son Jotham was a baby.

A customer of hers had made a shocking accusation in a text message.

She’d kept the message and read it out loud to me: “Shame on you for going to the witch doctor and sacrificing your son just so that you can get rich.”

I had heard of this idea before because I had been told that people had said similar things about me.

It’s a complicated belief to get your head around.

Some people in Tanzania think that people have DS because their parents have gone to the witch doctor to cast a spell to make themselves rich and have given their own child’s mental capabilities as a sacrifice.

Magreth was incredibly sad that someone would make such an accusation about her.

“After I received the text, I couldn’t even continue to feed the baby. I just cried and cried. It was the worst experience of my life.”

When she went out to the park with her son she started noticing people staring at her.

“Back then I was not comfortable to go out in public with my son because some people looked at me as if I’m a sinful person,” she told me.

She felt people judging her most when she was driving with Jotham in the car – in a town where many people couldn’t ever dream of owning a car in their lifetime.

“That’s when you give them the answer that you have used your son for the money ritual.”

Sitting across from Magreth, I was filled with anger. I found myself shouting: “I want the world to know that we did not go to the witchdoctor.

“That isn’t how we ended up with children with Down’s syndrome.”

While the accusations made against parents are outrageous, if those parents do give in to the shame and hide their children, the consequences are heartbreaking.

By locking their children away, these parents are denying them the opportunity to socialise and learn.

The condition can lead to smaller stature and a learning disability. But our children with DS do learn, it just takes a bit longer.

Magreth and I have a shared love for videos on social media that prove this.

There was one that blew my mind and I couldn’t wait to to tell her about – US actor and campaigner with DS, Frank Stephens’ speech at congress had gone viral.

I had never seen someone with DS speak as eloquently as him before. I got in touch with Frank to ask him what circumstances had led him to be such an accomplished public speaker.

He was clear – it was a result of his parents involving him in everything when he was growing up.

One physiotherapist, Godfrey Kimathy, told me when he was working in Magreth’s region he found a seven-year-old girl who couldn’t walk or talk or go to the toilet, not because she had DS but because she had been locked up her whole life.

Her parents had locked their daughter up because their neighbours believed they had made her that way in order to become rich.

But Godfrey said he couldn’t even see the wealth that the neighbours were talking about.

Magreth went down a different route – she became defiant against this stigma.

She now takes Jotham everywhere and by doing so she hopes to change her world.

And I want to change my world too by proposing the introduction of a new Swahili term – “Traisomi ishirini na moja” it’s a direct translation of trisomy 21 – that extra chromosome.