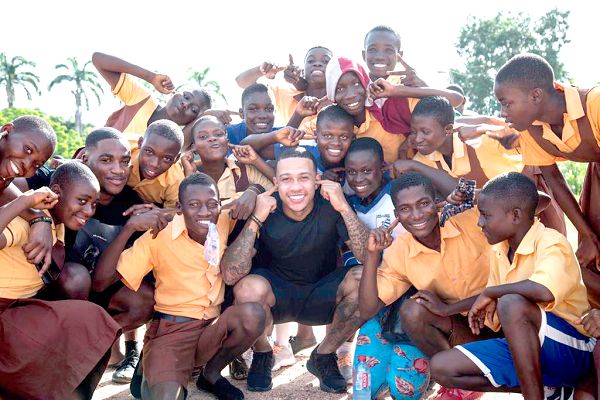 A Dutch professional footballer, Memphis Depay, has donated an Index Braille Embosser- Everest- DV5 for the production of reading materials for visually impaired students of the Cape Coast School for the Deaf and Blind in Cape Coast.

Depay, who plays as a winger for French club, Olympique Lyon and the Netherlands national team, also donated sporting equipment such as footballs, jerseys, shin guards, football boots and trophies to the school.

The father of the 24-year-old hails from Cape Coast in the Central Region.

Presenting the items to the school, Depay, who was also named the Best Young Player in the world by a France Football Magazine in 2015, said he was touched by the plight of the students and decided to help provide some of their basic needs to improve on their well-being.

Depay,  the Founder of Memphis Foundation, pledged to support the school in the training of the students in soccer, swimming and other sporting activities.

He announced that the foundation would construct a state-of-the-art gym and swimming pool for the school next year, adding that he would visit the school once every year to train the students.

The Headmaster of the school, Mr Setumte Ametewee, who received the items, thanked Depay for the kind gesture.

He asked the staff and students to continue to pray for the football star and the foundation to enable them to extend their support to other departments of the school.

Mr Ametewee used the occasion to appeal to individuals and organisations to come to the aid of the school, particularly to improve the road network in the school.