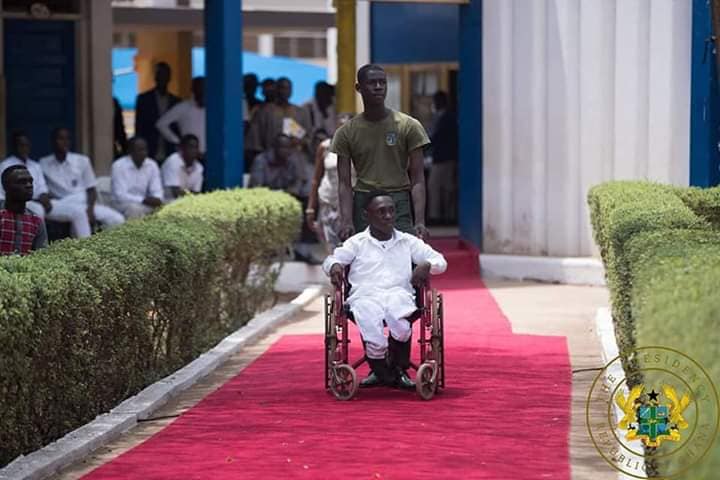 Sometimes, all we need is that inspiring, never give up and keep moving forward type of story to put some spice in our own lives.

Here’s is an incredible story of a poor first-year student at the Opoku Ware Senior High School who is living with disability meeting President Akufo-Addo as narrated by Rodney Nkrumah-Boateng:

This young Form One student at Owass was born disabled. After his mother had another disabled child, their father bolted.

His mother sells tomatoes on a table in Aburaso in the Atwima Kwanwoma District of the Ashanti Region and has struggled to bring up her kids by herself. The boy had aggregate 8 at last year’s BECE and was placed in his first-choice school, OWASS.

His best friend has been wheeling him around for many years and gained admission alongside his friend. He continues to wheel him dutifully on campus and today he did the honours of wheeling him down the red carpet to see the President.

A Katakyie (an old student of Opoku Ware) in the US donated a new wheelchair and an amount of GHS1000 to the boy when he heard his story, and yesterday at our 68th anniversary speech day, he was brought face to face with the President, who presented the wheelchair and the cash on behalf of the said Katakyie.

The mother could not hold back her tears and every single person in the quadrangle was moved.

The President gave him a few private words of encouragement and he and his teary mother expressed their appreciation to the president.

Beyond all odds… we push for the greatest manifestation of ourselves.