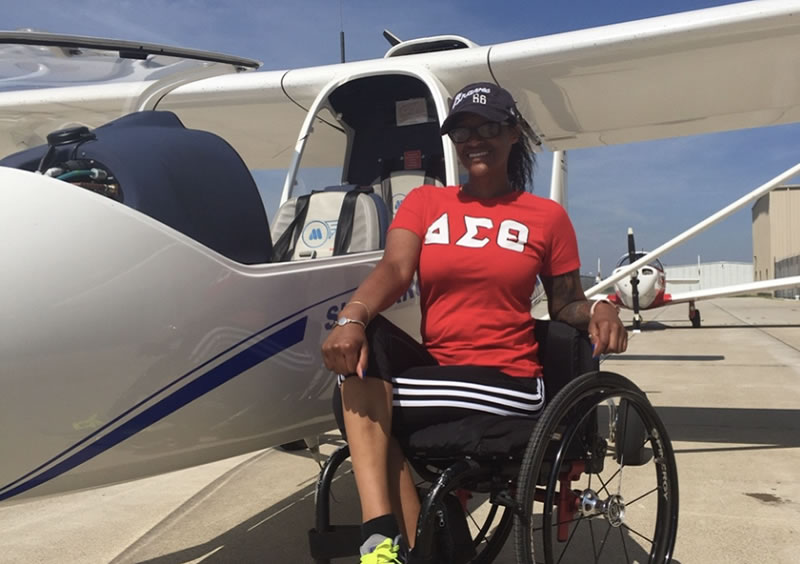 Leslie Irby was just 16 when she flew her first plane under a training programme that helps African-American children gain exposure in aviation.

But seven years after her flight, she got involved in a terrible car accident that would leave her paralysed. Nevertheless, she was able to bounce back, and just last month, she became the first known African American female with a disability to receive a pilot’s license.

“I started flying when I was 16 at my local airport here in Atlanta. There is a program operated through OBAP, called ACE (Aviation Career Enrichment), whose purpose is to introduce aviation to young African American children. In ACE, I flew a Cessna 172.

“Through that program, I was selected to participate in an elite group of aviators to be a part of a summer flight line program at Falcon Field, in Peachtree City. Through that experience, I was able to fly a more streamline aircraft (Diamond 20) and gain more flight hours,” 29-year-old Irby told Because of Them We Can about how her love for flying began.

Irby, after her first flight, had thought that her dreams were just about to materialize, but this was nearly marred by the car accident she had in 2013 which claimed the lives of two people, leaving her and one other paralysed.

Then 23, Irby sustained an L3 spinal cord injury and was now compelled to use a wheelchair.

“I started rehab at Shepard Center, in Atlanta. The first day I was told I would be in a wheelchair, the therapist came in my room and I asked, ‘Do you all have a pink one I can borrow?’ They all laughed, but I knew this wasn’t going to be bad, this was going to be a new start, so why not be myself through it!”

For a year, Irby was going in and out of the hospital but this did not prevent her from pursuing her dreams. She believes that her wheelchair was a blessing as it lead her back to her aviation dreams.

“I am an avid traveller. I have visited more countries in my wheelchair than I have able-bodied. One day while flying I had the epiphany that I should be the one flying myself to some of these places. ‘Why spend hundreds of dollars on an airline when I can fly myself?’”

At that moment, Irby decided to participate in a programme called Able Flight that helps people with disabilities acquire experience in the cockpit. The aspiring pilot was accepted into the programme and she received a scholarship.

After starting training in May, she successfully completed her first flight alone on June 1 and received her pilot’s license on June 28th this year.

“I was selected among nine other aviators to be a part of Able Flight’s 10th-anniversary class. We started our flight training at Purdue University on May 18. The aircraft we flew were sky arrow 600s. It is a light-sport aircraft equipped with hand controls for pilots with disabilities.

“The rudder pedals are controlled by a T-handle. To control the rudders, all the pilot has to do is push the handle forward or backwards,” she told Because of Them We Can.

“On June 1, I completed my first solo flight. June 28, I passed my check ride and received my official sport pilots license!”

But that’s not all for Irby, as she is currently making plans to get a private pilot license. She also hopes to be an inspiration to others who would want to follow her path.