One look at Kwasi, Freeman and Emmanuel and it does not give you any clue that they are not your typical or regular Ghanaian workers.

They are the unexpected boom to Beneflex Car Washing Company at Tantra Hills a suburb of Accra.

Just a year ago Benedicta Folivi, the CEO of Beneflex Car Washing Company decided to do good as he stumbled on a money making secret that is very good for business.

She is more than an advocate for people with disability, she puts her advocacy at where her hiring policies are.

It is not everyday that employers come calling so when Emma got a chance to work at the car washing bay he couldn’t wait but jump to it very quick.

Emma and his co-workers are deaf and their disability and the disability of millions of others in the world is transforming the global business space.

Think of them as an inspiration.

Global report on disability shows that the proportion of disabled people is rising and now represents 1 billion people that is 15% of the global population.

But, despite a robust disability rights movement and a shift towards inclusion, disabled people remain second-class citizens, that is according to the report by the World Health Organisation and the World Bank.

The International Labour Organization  say the employment rate for people with disabilities is roughly twenty-five percent lower than those without a disability.

Eighty percent of the world’s disabled population are of working age, but the right to work is frequently denied to them. Ghana is no exception.

Not long ago Ghana was tagged as the country which is unfriendly to disabled people. People like Benedicta is helping to change the narrative.

She tells Business Insider Sub Saharan Africa (BISSA) that it started after countless attempts to secure a corporate job. She waited until she realised she could create a corporate business for herself.

The idea of setting up a business fell on her as she sat down to think through how she could create a job. Viola! the a car washing bay came to her mind.

Like most startups, it hasn’t been all rosy till now. From capital to hiring of staff.

There is the common notion that people with disabilities require more resources to achieve the same outcome as non-disabled people thus making them more costly employees and less desirable workers and once they’re able to find work. However, Benedicta believes otherwise.

She hired her first disabled staff (Emma) on recommendation. Working with him was awesome so I asked him to introduce to his other disabled friend who needed jobs to me, says Benedicta.

She now host a staff of ten who are all deaf.

In any business, communication is integral to running effectively. But how do they communicate with their clients? Sign language.

BISSA caught up with a client(Ama) who had pass through to wash her car. According to her, she travels miles away to get her car wash at the venue.

Ama says she enjoys the type of service being given as well as the cool prices. On the communication front, she said

“initially i had a challenge with communication. The first time i drove her, I didn’t know they couldn’t speak. It was later on that i realised. I was surprised initially but I have come to appreciate their work”. 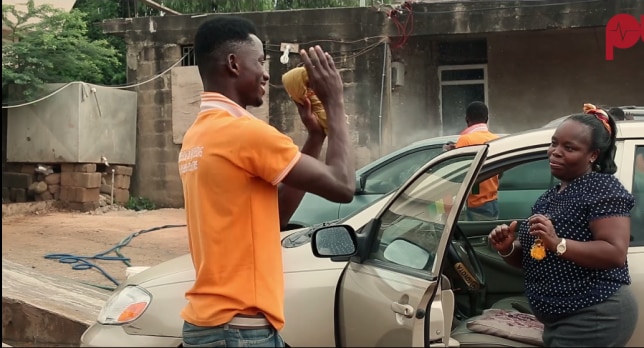 Whenever I come here i get to learn a sign or two from the staff.

Clients pay as low as 7 cedis (less that 2 dollars) to get their car washed and this is enough to keep them coimng.

But how safe is the workspace for the staff?

Benedicta, CEO of the washing bay admits that one of the top challenges is the inability for her staff to hear when cars honk at them.

She tells BISSA that, her interest in her staff goes beyond their salaries as she takes them to various disability empowerment programs so they could benefit.