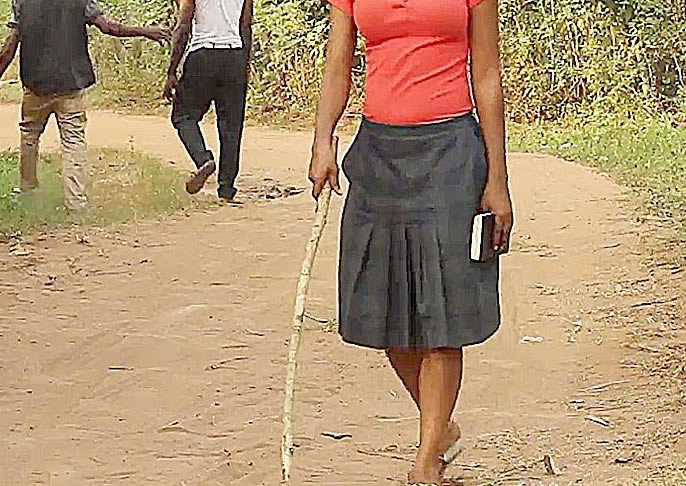 Sixteen-year-old Leticia Vidza from Cape Coast who lost her sight four years ago, resulting in the curtailment of her education, has had her sight restored.

This followed a 30-minute surgery performed by a team of American and Ghanaian doctors to remove a cataract from both eyes at the Cape Coast Teaching Hospital (CCTH).

The eye specialists are performing free eye operations on some 600 patients with eye defects.

Vidza kept her head down and with the eyes closed, took a deep breath, before mustering the courage to open her eyes after the plasters were removed.

She could not hide her joy at seeing once again as tears run down her cheeks.

The ecstatic girl told the Ghana News Agency (GNA) that she was immediately going back to school to continue with her education.

Recalling her predicament, she said; “it all started in school, I could not see from afar. My parents did their best, sending me to hospitals but my condition worsened until I went totally blind. I am very excited and I can’t wait to see my friends.”

Similarly, 70-year-old Hawa Issaka who had been blind for the last seven years of her life could not hide her joy as she expressed gratitude to the doctors and nurses and the organisers for the kind gesture.

The free cataract surgery project, a partnership between the Himataya Cataract Project (HCP), an American Non-Governmental Organisation, Ghana Health Service (GHS) and the CCTH is expected to benefit about 600 cataract patients in the Region.

Dr Oscar Debrah, Country Representative of HCP, said over 1,000 patients were screened in Cape Coast and its neighbouring communities but some of the patients failed to turn up out of fear for the surgery.

He said national blindness research conducted in 2015 on the rate of blindness in the country, indicated that, about 0.7 per cent of people were blind and that about 54 per cent of the population had cataracts, adding that people were at the risk of developing cataracts as they age.

Dr John Welling, Country Medical Coordinator for HCP, said the organisation had been working in Ghana for the past 13 years and had partners all over the country including the CCTH.

“There are many people who are needlessly blind, they don’t need to be blind, cataract can be treated within 10 minutes of surgery and cause less than $25 or GH¢120 cedis and so there is no reason for people to live and die blind hence the decision to intervene,” he stated.

Dr Welling said the HCP was working to overcome barriers impeding the delivery of cataract care to under-served, needy blind people in the developing world.

He indicated that HCP was committed to skills-transfer and ability to provide high-quality surgical care in remote settings, reaching patients who would never make it to the hospital.

Dr Eric Ngyedu, the Chief Executive Officer of CCTH, said the exercise formed part of a Memorandum of Understanding (MoU) between the hospital and the HCP with a concurrent strategy to provide high-quality care, train local personnel and ultimately establish a world-class eye care infrastructure.

“It is important we are doing this now because it falls within our next four-year strategic plan, that is to get an eye centre for the Cape Coast Teaching Hospital,” he revealed.

A total of 423 eye sights had been restored since March and urged people with the condition to take advantage of the exercise to have their eye sights restored.